Dealing with two sick dogs. When my dogs get sick, that's it. All other activities get suspended. I am wracked with guilt whenever these guys get sick or hurt in any way: I feel that I have violated a key tenet of the ancient pact between dog and man, to wit, man shall protect dog from harm. The Diplowife (ret) and I took them to our very good South African vet who determined that they had picked up a nasty intestinal infection at the dog park; he has put them on antibiotics, probiotics, and a special high fiber diet. The boys, of course, refuse to cooperate; they will not allow me to stuff the meds down their throats.

Ssshhh! They're finally napping after eating a bit of the new diet, but without much enthusiasm.  That leaves me a few minutes to comment on stuff, just stuff . . .

Meh . . . it was bland. I don't say that because The Donald did not attend, but because by now we all can do the Great Kreskin routine of predicting what each candidate will say in response to the predictable queries. The Fox moderators did not play at the top of their game; their questions seemed a rehash of stuff we've heard before. I have to wonder if we do not have too many of these debates. As with even the best blogger--ahem--a politician in a long campaign finds that he or she repeats lines. That was probably OK back in the day when we did not have millions of different mass media outlets picking up and apart anything said anywhere at any time. In these days of info-overload, frankly, it's hard to remain fresh.

That said, I thought Rubio did best; he came off as articulate, passionate, and as somebody who has thought things through. Cruz, normally quite good, was flat, and his jokes did not go over well. The others? We've heard it before.

Did Trump make a mistake by skipping the debate because of his feud with Megyn Kelly? I have no idea and don't think anybody else does. Nearly every prediction or observation made about Trump--including by this humble blogger--has been wrong. He does and says things no other candidate dares, and that does not hurt him and often, in fact, helps him. Really quite remarkable. Would he make a good President? I don't know. Would he be better for America than Obama, Clinton, Sanders, Biden? I would have to answer in the affirmative--but that's a low bar. Is he the best candidate? I don't know. I, personally, fluctuate among Walker, Cruz, Rubio, even Fiorina. By the way, I thought Carly Fiorina had the best line: "Hillary Clinton has escaped prosecution more times than El Chapo." Brilliant! Heads all across the progressive universe exploded in outrage. Quite funny. Progressives have such a hard time with truth-telling.

As noted before, it does not appear Hillary's email troubles will go away. In fact, they look to be getting worse. We learn today that at least 22 emails on her private server cannot be released--even in heavily redacted form--because of the very high classification of the material they contain. The Clinton response? Stuff is over classified. Kinda missing the point, no? That's not Hillary's call. I might think it ridiculous to have a 70 mph speed limit on the freeway, and that I alone should be allowed to do 90 mph, but . . .

The American public, therefore, will not see emails already seen by foreign intelligence officers and rulers in Russia, China, and Iran, along with several hundred teenaged hackers from Brazil to Singapore to Nigeria. Maybe Kerry can ask his friends in Tehran to free the Clinton emails. Bottom line, and in all seriousness, Clinton belongs in jail. Joe Biden put on your spurs! You have to save the Dems from themselves . . .

The boys are awake. The little guy, if you can call a 100-lb dog little, has run to the back fence to argue with the obnoxious neighbor. Now, the big guy has joined him on stage. I have to go break up that debate . . . 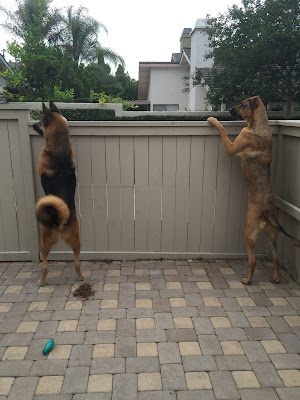