More Craziness from the Anti-Trump Clique

After a long, long time of ignoring my 1973 Mach-1, I took her for a spin this sunny and warm morning here in southern California. Hadn't started the ol' beast in some three months; I was sure the battery would be dead. But, no! I forgot that Trump is president, and things all around are much better. She fired right up, and with a bit of choke, and after some fits, was soon running like a champ. 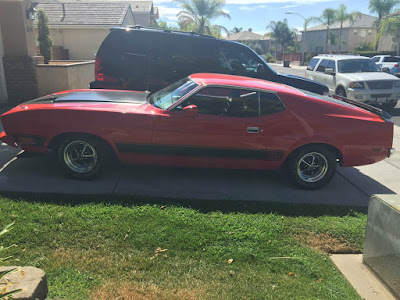 Drove on some rural roads, and the V-8 sound of the 351 Cleveland cleared my head so I could think about the continuing insanity aimed against that very president.

Where to start? Just a sampler.

How about the "outrage" over the Trump administration replacing the US Attorneys? You can look up the media coverage of this and it seems like a replay of the Night of the Long Knives, of Stalin's Purges, of the Mexican Revolution's war against the Catholic Church, of . . . well, you get the point. It is, in fact, a supreme example of a Nothingburger with an extra order of Nothingfries. These US Attorneys are political appointees; an incoming administration, especially of the opposite party, is not required to keep them on anymore than it is required to keep on Ambassadors, Cabinet Secretaries, White House staff, and a host of other officials.

In the Department of Justice regulations governing the appointment of these Attorneys, we read (Section 3-2.120),

If you want more, you can go ahead and read Parsons vs United States (also here) in which the Supreme Court affirms the power of the President to remove US Attorneys. I guess this 120-year-old ruling was not included in Attorney Preet Bharat's legal education, since he seemed to think that the job of US Attorney for the Southern District of New York belonged to him by right of, well, by right of his wanting the job. He refused to resign as requested by the Attorney General, and got fired. The press, forgetting that Obama and Clinton had done the same thing, had a field day, bemoaning the "politicization" of justice, praising Bharat, and wondering what would happen to all the cases he was working.

Two observations: 1) if the press is full of praise for a prosecutor, it's time to get rid of him/her; and, 2) the cases will continue. Not hard. Nobody is irreplaceable. The President has the right to name his people to key slots, and the Senate can accept or reject them. When I got pushed out of the State Department by the Obamistas, foreign policy continued . . . just saying. Fake crisis. Fake news.

The wiretap story. This one is getting confusing and both sides have muddied the waters. The Obamistas, however, are the more guilty party.

Remember all that Russia is hacking our election stuff? Here for example. The Dems seemed to have "proof" that Trump's people were in constant and close contact with the Russians, who were actively working to get Trump elected. That "proof" included evidence of contacts between General Flynn and AG Sessions with the Russians. Flynn got so fed up, he quit. Sessions recused himself from any investigation into the matter. There were stories of FISA (Foreign Intelligence Surveillance Act of 1978) requests to monitor a server in Trump Tower that was in communication with a Russian bank. Lots of leaks from the intel bureaucracy implying there was all sorts of evidence of Trump-Putin collaboration.

When Trump exploded--ill advised?--that Obama had him wiretapped, the press suddenly shifted gears saying there was no such evidence and demanded Trump provide it--unlike the fact that the other side never provided any evidence of Trump-Russia links. One might ask, if there is proof of such links, it must come from surveillance, no? Or is it just made up? Can't have it both ways, unless, of course, and I fear this is where we are actually, there was surveillance, it found nothing, AND results are being made up via anonymous leaks.

Anyhow, Txiki is barking up a storm in the backyard and my wife is convinced it is another attack by the reptile brigade. Must go check.