Mr. Mueller, Your Fifteen Minutes are Up. Please Leave . . . Oh, and Dogs

You spent north of $34 million, had a staff of dozens, interviewed hundreds of witnesses and issued only God knows how many subpoenas, and after some two years produced a nothing burger report of some 448 pages in length that concluded the President did not collude with the Russians and that there was insufficient evidence to charge him with obstruction of justice. That's not enough, I guess. No. You had to come back for one more carefully orchestrated slam of the President by way of an eight minute statement to a press gaggle not allowed to ask questions. In that statement you did your best to "dirty up" the President, a la Comey and Hillary, but added nothing new or interesting. All you did was provide some slimy innuendo that the Congress should proceed with impeachment, a recipe for sure-fire political disaster for the Dems, by the way.

Clearly, it would seem, that Mueller seeks to escape testifying under oath and avoiding tough questions from the Republicans: e.g., When did you know that there was no there there on collusion? Why did you continue "investigating" after that? Was it to try to set a perjury and obstruction trap for the President and his staff? Why didn't you explore the origins of the Steele "dossier"? What about Hillary collusion with the Russians and other foreigners? You managed to investigate people for tax fraud and taxi medallion abuse, but not the abuse of FISA, "unmasking," framing American citizens with FBI informants, the role of MI5/MI6 in all of this, etc.?

I say, yank him in and ask. He doesn't get to say when the game ends.

On the other hand, I am tired of his pompous virtue signaling, and want him to just go away and write that book, the one nobody will read . . .

On a more pleasant note, two days ago while at the New Hanover County Sheriff's Office registering my two dogs, I heard barking. I asked the nice lady whether there was a dog pound on the premises and, if so, could I take a look. She said, "Of course you can!" Off I went, and immediately spied a wonderful young--about 18 months old--German Shepherd mix in the last cage; I declared I wanted him. So the Diplowife and I interviewed the pooch, and fell in love with the guy. Overcoming any good sense we might have left after all these years, we said we'd take him, and did.

He got a mixed reception from our two established Diplodogs, but gradually they worked things out. Charlie is now our new four-pawed son.  Picture follows. 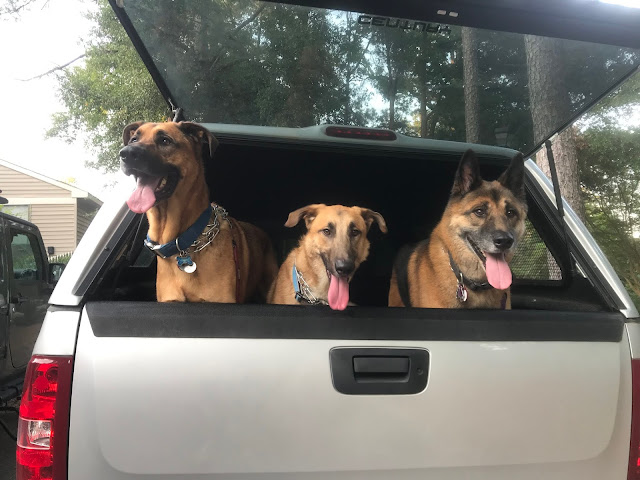 From left to right: Txiki, Charlie, Hartza. After a day at the park