"We may with more successful hope resolve, To wage by force or guile eternal war," President Obama Speaks On Libya

I set low standards and low expectations for the President's speech on Libya, and it fully met both.

I simply do not believe this President. He expects us suddenly to believe that he is a patriot and sees the US and the US military as a unique force for good in the world? That runs counter to everything the man has said and done for his whole career.  He is simply unbelievable. He is simply running as fast as he can for the political center as the clock moves ever closer to November 2012.

He did a good job of reading the teleprompter, he had good cadence, and good posture. He, however, did not make the case for intervention in Libya, nor explain how his intervention was superior to that of Bush's in Iraq, which he has always opposed.  In most of the speech, you could have substituted the word "Iraq" for "Libya," and "Saddam" for "Qaddafi."  Bush, Cheney, and Rumsfeld must be either laughing their heads off, or shaking them in stunned amazement.  How can Obama ever, ever criticize Bush for his intervention in Iraq, except to say that Iraq cost more than Libya?  Tyrant exploiting his people and their wealth; carrying out massacres and threatening more; promoting terrorism around the world including against Americans; creating a situation that threatens the stability of the neighborhood -- uh, is he talking about Libya or Iraq? You tell me. The only accusation Obama could not make against Qaddafi was that he has weapons of mass destruction--and, ironically, he could not because the Bush administration dismantled Qaddafi's nuclear weapons' program.

His speech was weakest in explaining the burning American interest.  To bring up Qaddafi's past acts of terror against the US, raises the question of why, then, didn't you go after Qaddafi right away?  Why wait for the people of Libya to rise up? Why didn't the CIA just bump him off? Has Qaddafi done any of that terrorism stuff lately? Qaddafi only lost his legitimacy when the people rose against him? If he had managed to keep control of the situation, there would have been no intervention?  We intervened to ensure that the UN Security Council's writ was respected?  How many of the UNSC countries have joined us? Has Russia or China? How many of the rotating members joined us? Did big ol' Brazil--you know the place he just visited and promised our oil market? No, not all.

He still could not explain the mission.  As far as I can tell, he sees us having two missions: the military one of establishing the NFZ which will now "pass" to NATO (don't get me started on that little legerdemain), and a political one of removing Qaddafi.  He sees these as somehow separate missions.  Those are the sort of distinctions without a difference that clever speech-writers and memo-drafters in Washington come up with that prove impossible to implement in the field.  What if the political opposition needs our military support to bring down Qaddafi? Is the answer, "No?"  What if Qaddafi won't leave, and is spoiling for a fight?  So what is the exit strategy? How do we know when the military mission can stand down? Can the military cease and desist while Qaddafi is still in power?

Folks, as suspected.  There is no plan except to bomb away and hope that something happens.

P.S. The quote in the title comes from Satan's speech in "Paradise Lost."  See the picture below; I believe that was taken during the President's speech, or maybe not . . . . 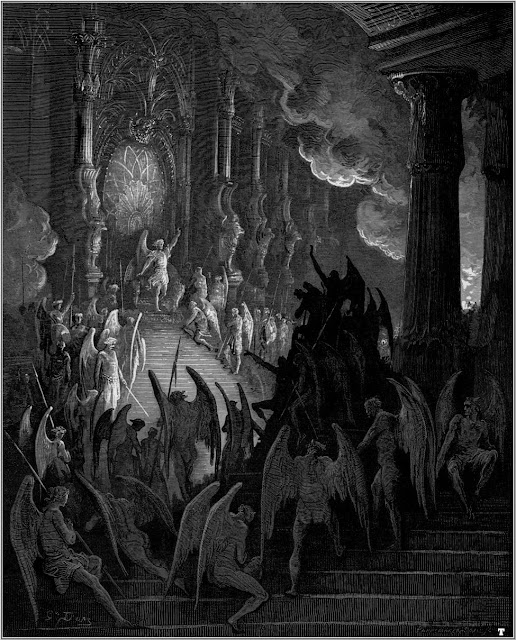