Obama and The Hate That Dares Not Speak Its Name

Well, folks, we paid for it for so we might as well enjoy the show, The Greatest Show on Earth, that is.

I write, of course, about the great gnashing of teeth, the rending of garments, the bleat of shorn sheep fearing a visit to the slaughter house comes next; yes, I refer to the outcry of well-paid media liberals progressives--cash for clunkers--from whose eyes the scales apparently have fallen to reveal that the Great One, The Healer of the Earth, has feet of clay.

Ah, where is today's Goya to depict the gory glory of the Progressive Saturn eating his own children? 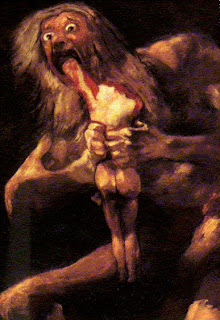 Or is it, in this case, the children eating Saturn? One or the other, still a great show.

First in the buffet line we see progressive commentator extraordinaire Richard Cohen of the Washington Post. He writes that in the case of Obama we have a "Question of Competence." He praises candidate Obama but then notes that (emphasis added),


this same man has lately so mishandled both domestic and foreign policy that he is in mortal peril of altering his image. This unsettling and uncharacteristic incompetence became shockingly clear when Obama failed to come to grips with the Syrian civil war. I did not agree with the president's do-nothing policy, but at least it was both a policy and intellectually coherent. What followed, though, was both intellectually incoherent and pathetically inconsistent -- a "red line" that came out of nowhere and then mysteriously evaporated, and a missile strike that was threatened and then abandoned. It was a policy so wavering that if Obama were driving, he would be forced to take a breathalyzer.

The debacle of the Affordable Care Act's website raised similar questions about confidence. This was supposed to be Obama's Big Deal. The president has other accomplishments -- navigating out of the Great Recession was no minor feat -- but restoring the status quo does not get your face on Mount Rushmore. It takes achievement, a program -- something new and wonderful. The Affordable Care Act was supposed to be it.

Something went wrong. People could not sign up. Why? Not sure. Who's at fault? Apparently no one. <...>

History will someday provide perspective and say, possibly, that Syria and Obamacare did not matter. I doubt it. At the least, they help validate the once-frivolous Republican charges of incompetence. A competent president would beware. As Casey Stengel might note, strike three is coming up.

Here, my friends, we see Poor Richard as the effects of the gallons of tainted Kool-Aid he has ingested begin to wear off. Note, however, that the toxins have not completely left his system, to wit, his silly comment about "once frivolous Republican charges of incompetence," but gradually the hypnotic drugs wear off. Reality is such a downer.

Next, over at the vegan station, we see CNN's Anderson Cooper, the oh-so-precious progressive darling, berating the administration for dishonesty on Obamacare (here, here, and here.) So now, now, we are getting some "investigative" reporting from CNN? Really? Now AC is letting the American people in on the great "secret" he has uncovered, i.e., Obamacare is built on lies. Maybe, just maybe, this would have been a good thing to have "discovered" about a year ago? Wasn't hard, but, anyhow, welcome to the club, better late than never.

At the salad bar, we find FOX News' favorite liberal commentator, Kirsten Powers, who spent a couple of years promoting the glories of Obamacare, but now reaches the reluctant conclusion that,


“The problem is, that the promises, that the basic fundamental promise that the president made has not been borne out for people,” Powers said on Fox News’s “America’s Newsroom.”

“It’s true there are a lot of people who won’t see insurance change, I guess if you work for a corporation or something, but for people, if you’re in the individual market, I don’t know a single person who hasn’t seen their insurance go up by double,” she added.

A bit later, Powers shows that she has begun to understand some economic numbers, unlike the typical progressive (my bolding),


“If the president had said, ‘If you like your plan can keep it for double the price,’ I don’t think that people probably would have been as supportive. So I think that his primary problem is that he made a promise that he is not following through on.”

Ya think? Really? Hey, Ms. Powers, congrats on acquiring such deep wisdom. "People probably" would not have supported a doubling of their insurance premiums . . . thank goodness for a university education.

Then, ripping into the prime rib, we have everybody's favorite deranged commentator, Chris "Obama sends a tingle up my leg" Matthews of MSNBC. Mr. Mathews, the most fanatical of fanatical Obamistas, shone with eagerness to tear apart anybody who expressed even a mild doubt about the Obama misadministration's ludicrous story on the Benghazi disaster. He helped that misadministration put out the absurd "It's YouTube's fault" line, and blasted Republicans who dared question it. That was then, this is now. It seems that now, well, he has "questions,"


Where was the U.S. Cavalry, to use an American image. Where were the people that could’ve come or tried to get there within how many hours it took to save the lives of the people still living? Where were they and why weren’t they called to do it? I’m going to ask that question until I get an answer.” <...>

"[T]he questions I have about this are what was the State Department’s role in real-time, not beforehand, but at the time of the attack in defending the lives of their people, especially the U.S. ambassador, who was a friend, a friend of the Secretary of State’s, Hillary Clinton? What was their actions, what was the tick-tock? What did they do when they got the warning of the attack?”

As a former FSO it is just too difficult for me even to extend a very belated welcome to Mathews as he ostensibly tries to clamber aboard the USS Full-of-Doubts. He was so repellent, so disgusting, such an enabler of the Obama/Clinton/Rice mendacity on the Benghazi murders that I can't even write about it.

So what's happening? Is there some genuine "getting of wisdom" among the Obamabots in the media? Are they the proverbial liberal progressives who have been mugged by reality? Maybe.

They might also just be snake oil salesmen who want to make sure they get no blame for the horrendous side-effects of the magical potions they sold to the low-info Boobi who comprise the mainstay of Obama's support: instant rewrite of history. Maybe, maybe, maybe, but I don't think so. They, after all, know that they can't be thrown under the Obama bus because the wheels already have come off it: not enough ground clearance under there for all of them.

I think the real explanation for their turning on Obama is that they want him to fail because they're racists.