One of my sons attended the April 28 Trump rally in Costa Mesa, California. Below I provide his account of the event. I, of course, provide some commentary at the end.

My buddy, Jake, his girlfriend Lindsey, and I went to the Trump rally at the Orange County Fairgrounds in Costa Mesa. Jake is from Wisconsin and a Trump supporters since the beginning.  He's the one who convinced me to go. We parked our cars about two miles from the rally site; there was no way we were going to risk our cars there. We expected trouble. We took an Uber to the rally.  The Uber driver was Asian, and told us that his cousin is a big Trump guy.  I had an extra ticket, so I gave it to him.  He told us he would think about it but, he was concerned with parking.  We gave him our phone numbers, and told him he was welcome to join us if he changed his mind.

At the rally, the security presence was strong and visible. I've never seen so much law enforcement.  There were protestors, some with Anarchist flags and others with Mexican flags, but not too many, not yet, and most of the "anarchists" were of the pajama boy variety--the really nasty thugs came later. The cops were trying to keep the protestors away from people waiting in line to get in. The first thing I noticed about those people in line was that it was majority women. I thought, it would be mainly white guys, but no, it was mainly women. Lots of minorities, as well; I was quite surprised.

While we waited in line, the protestors yelled cuss words, and the "usual" insults, such as calling everyone a racist and a bigot. Some of the protestors would get through the police line and run up to the people waiting, and start yelling at them. Initially the protest remained peaceful, other, of course, than the chant of wanting Trump dead.

As noted, the most interesting part of the rally proved the demographics: it was probably 60% women. Lots of minorities as well, plenty of people holding "Latinos for Trump" signs. It was a good mix of African-American, Asian, White, and Hispanic--everybody got along well. Over the loudspeaker, we kept hearing somebody saying over and over that if we saw protestors in the crowd, please do not touch them or say anything to them, just alert security by yelling "Trump! Trump! Trump!" Initially, I thought this was ridiculous, but it worked. Random protestors would get in with the rally crowd and start yelling, and folks would shout, "Trump! Trump! Trump!" The very efficient security personnel would escort the protestors out. No violence.

Trump showed up about 45 minutes late, actually sooner than I expected. He started talking about parents who had lost children to illegal immigrants. He eventually moved on to other topics such as jobs and foreign policy. He had no note pad or teleprompter. He never had any pauses or 'ums' or anything like that. He went on for about an hour and could have probably gone on longer, but it was starting to get late.

He has an interesting way of engaging people. The casualness of the way he speaks, makes it seem he is talking directly to you; almost as if he were in your living room and we were all just having a beer and talking politics. He knows how to hype up the crowd and get them energized. Every now and then he would go off on a tangent on how "awesome he is" and start to lose the crowd. Once he started losing the crowd, he would immediately get back to talking about the issues. He has a sense of humor as well. Some funny jabs at the media, Ted Cruz, Carly Fiorina, and John Kasich. The crowd was on their feet the whole time.

At the end, when we left, we were slightly concerned about what was waiting outside. While inside, we could smell burning tires, which can't be a good thing. There was also a hovering police helicopter shining its light on the parking lot outside the arena. When we went outside, the police had managed to move some of the protestors, many waving Mexican flags, away from the entrance and towards the street. Other protestors were vandalizing cars, slashing tires, throwing bottles at the cops. We tried to get closer to the protestors until people starting running the opposite direction; our curiosity ended and we began to leave. There were cops and protestors everywhere. We walked by some guys in a car with a Mexican flag trying to pick fights with anyone driving or walking by; they would yell insults and make threats. One maniac started pulling doughnuts in the parking lot with his car, putting people's lives at risk. We promptly walked away from all of it and booked it back to my car.

Oh, by the way, the Uber driver? He texted us telling us he was in the rally. Maybe we converted him?

Ah, the lefties. They can't stand freedom of expression or assembly. Wonder who the great genius is who decided that the best way to undermine Trump's message on illegal aliens is to get a bunch of guys waving Mexican flags, threatening and punching people, trashing cars, and attacking cops. All that, of course, makes one feel all warm and fuzzy about letting in more illegal aliens . . . One has to wonder what would be the reaction if some Americans showed up at a Mexican political rally, waving American flags, trashing cars, punching people, and attacking cops? Hmmmm . . . 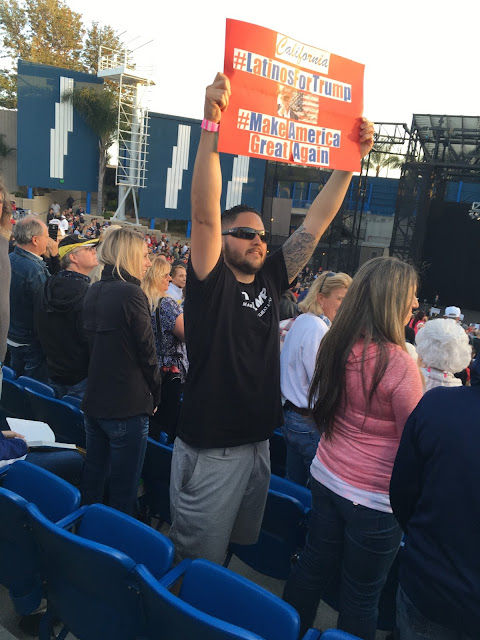