With a vote of 50-48, Judge Kavanaugh will become Justice Kavanaugh.  As you all know--so, of course, I will repeat it--Kavanaugh had to endure a thoroughly disgusting gauntlet to become a Justice. One thing is to have open political and ideological differences and disagreements on legal interpretations, those are legitimate issues to explore and discuss--Have at it!--it's another thing to try to destroy a person's reputation and career, and put him and his family in physical danger. The loons in the Democratic Party aided by the media echo-chamber and the cesspool that our academic institutions have become tried to do precisely that.

She lied. She became a tool for the loons, and was willing to lie to stop Kavanaugh. Why has she, according to her lefty lawyers, now decided not to pursue the accusations against Kavanaugh? Why did she only pursue them once Kavanaugh become Trump's choice for a seat on the Supreme Court? Why doesn't she go to the police in Maryland, where there is no statute of limitations on sexual assault, and make a formal presentation of what she says happened to her in Maryland however many years ago she decides it happened? Because . . . drum roll . . . it's not true. I really hope her perjury is not simply forgotten; she needs to pay for it. She, at least, should be sued for every penny she has made in her GOFUNDME effort. The loons must know there is a cost to being a loon, to being an instigator of a lynch mob. No more lynch mobs, please.

Just in: My son and his wife went to the protests in front of the Supreme Court today. Here's a thoughtful protestor reacting to the singing of "God Bess America" by some folks celebrating Kavanaugh's win. 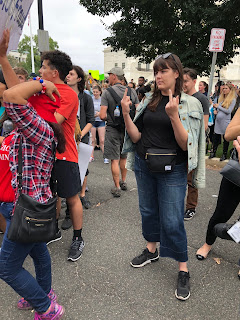 Notice the wit and intelligence on display