No politics. I can't stand watching the commentators on what might or could or will or would happen in next Tuesday's midterms. All the speculation about which voter base is more motivated and what it all means, is just flat boring and tiring. We'll see what happens; we'll see if we have blue wave, a red tide, or something Barney purple, instead.

I am in DC right now, having driven up from NC; sitting in my hotel room while the Diplowife and her sister visiting from Spain raid a nearby TJ Maxx. We will be seeing the two DC kids in a couple of hours. The Diplodaughter just snagged a pretty good gig at the White House working on foreign aid issues. She's waiting on her security clearances; I suggested she just go get the ones pulled from Hillary . . . guess it doesn't work that way.

Anyhow, we spent several very nice days at our little house in Wilmington. We have pretty much repaired it and it's almost back to its glory days.

Wilmington, NC is a perfectly delightful town.  It has a lot of old Southern charm which still resists the invasion of university students, a growing film industry, and expats from around the USA and the world.  The Diplowife, Diplosisinlaw, and I took the two Diplodogs to the beach. These big bad boys, although born in California, had never seen the ocean much less been on a beach. It was pure joy to watch them react to the waves as they went from terrified to being in love with plunging into the somewhat frigid waters. 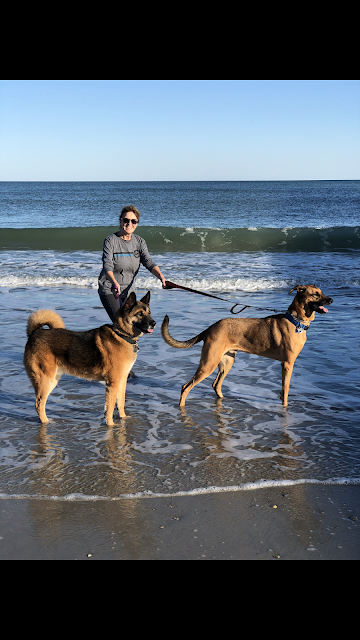 Here we see the Diplowife auditioning for a role in "Beastmaster, Mistress of the Waves and Wags."

As noted, it was a relaxing non-political joy to watch these guys racing up and down the beach in their duel with the waves. Dogs are the best.

Anyhow, that's it for today.

Signing off from the Great Imperial Capital.
Posted by DiploMad at 4:53 PM