Again, apologies to my three foreign readers: this comprises yet another post on the interminable US presidential campaign.

In today's little ditty I shall sing a simple song about announced Republican presidential candidate Donald Trump. Well, actually, before I get around to The Donald, I start by relating a cab ride in Paris many years ago . . .

In the early 1990s, perhaps the late 1980s (the Diplowife is not here to ask), I found myself in a Parisian cab taking the long ride from the airport to our hotel. I have a habit of asking cabbies about the biggest problem they face, having found over the years that cabbies live much closer to the true social-political-economic situation than do journalists, politicians, entertainers, and other high-and-mighty savants. In addition, cabbies tend to relate what they see without the politically correct censorship that strangles so much discussion in the West. This cabbie proved very blunt: "Arabs," he answered. He described a hellish immigration situation in France and how he feared entering many parts of the capital. He supported Le Pen since the other politicians did not discuss real problems. Up to this point I had dismissed Jean-Marie Le Pen in much the same terms used by the MSM, "far right racist," "nut case," etc. As subsequent elections and other developments in France have shown, Jean-Marie and his daughter Marine have, indeed, tapped into a truth about life in France which the major parties would rather ignore. We have seen the same phenomenon at work in Spain where the political duopoly has come under threat from "rightist" and "leftist" populism dealing with issues ignored by the two comfortable big boys. I no longer dismiss Le Pen or other populist forces in Europe, "rightist" or "leftist."

OK, back to The Donald. A bit of clarification. I don't particularly like Donald Trump; I think him an ignoramus on many foreign policy matters, with an ignorance that matches that of Obama. I see him as a political opportunist and a self-centered glory hound of the first order. He, furthermore, has no track record as a conservative or even a Republican: he has admitted voting for Obama; given money to the Clintons and other Democrats; supported Obamacare; and made a supposed fortune with some deals that smell of crony capitalism and other non-Kosher practices--and, for all I know, his businesses might employ a lot of illegal aliens. He, at least, seems as much celebrity as serious businessman, and we could see him--allow some exaggeration--as Paris Hilton with weird hair.

All that said, however, he has drilled into a large subterranean pool of resentment, and unleashed a real political gusher over the 2016 presidential campaign. He has brought out the deep concern of many in America, myself included, over what clearly forms a deliberate progressive attempt to change the very nature of our society via massive immigration from poor countries. This humble blog has berated its six readers with this topic on several occasions (here and here, for example) well before Trump seized on the San Francisco murder as an example of what he had been saying about illegal immigration. This murder was apparently committed by a much-deported illegal Mexican enjoying "sanctuary" in that city in foggy-brained progressive California--a place more concerned about Rebel flags and Christian bakers than about illegal aliens committing murders, robberies, rapes, and sucking up public benefits and services.

The GOP establishment--of course--has been caught unawares by the strong positive reaction from the Republican base to Trump's brash, very politically incorrect comments about illegal aliens and the destruction they cause. He cleverly or by pure luck has turned the lachrymose progressive accounts of the suffering of Central American women migrants back on the progressives. We see progressive media accounts of how 80% of Central American women migrants get raped on their way to the USA. Well, as he rightly asks, "Who's doing the raping?" They are getting robbed, raped and otherwise assaulted in Mexico. That's an old story which the press has been reluctant to touch until they decided to make it an issue to encourage leniency towards illegal migrants from Central America. I can tell you from my own experience in Central America, migrants feared the long trek across Mexico above all else. Well now the progressives "own" the accusation against Mexico, and will have a tough time deriding Trump for having read their media. Trump also cleverly included black victims of illegal aliens in his recent appearances--a reminder to black voters that the illegal immigration policy of the Democrat party is no friend to their interests.

I don't know how long Trump's legs are--I suspect he has a tendency to "self-destruct"--and whether the other GOP and Democrat candidates will successfully pivot to take on this issue. But it is now an issue, perhaps a Willy Horton moment? I was sent the below picture by a friend. Could it become the defining theme in the election? 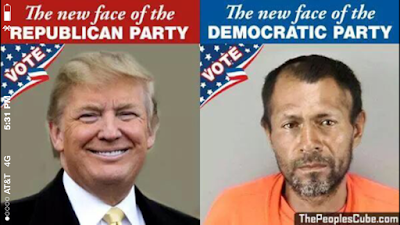