OK. I am back in Wilmington, now hanging drapes (Me! The worst handyman in the world!) and moving furniture and art work from where we had previously put it; the Diplowife had a new vision of where it all should be. Oh, Sisyphus, stop your whining! We will head back to Durham later today.

I wanted to write something on Democrats and dog whistles vs. steam whistles, but will have to put it off until tomorrow or so. The topic won't go away. Instead I will post about something much more fun. 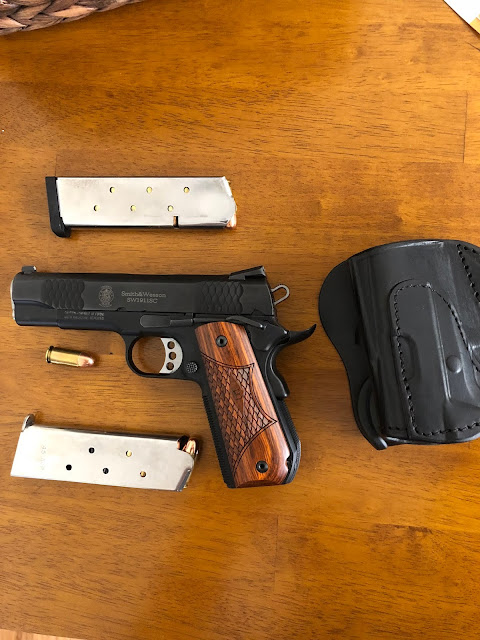 Look, I am an old fart, OK? In my 30-plus years overseas, I carried a variety of handguns. I started with my beloved 4 inch S&W .357 revolver. My colleagues shamed me into moving to semi-autos that carried a bazillion rounds, but my heart always hankered for the beauty and simplicity of the S&W revolver . . . until, of course, I discovered the 1911--yes, I discovered it; you didn't know that, did you? The 1911 has to be among the most if not the most iconic and cool handguns in the world. I carried regular-size 1911s, as well as 1911 Commanders and similar. Again, my colleagues laughed at my paltry seven, eight or nine rounds, and I ended up, again, for a time porting some 9mm pistols that had, well, a bazillion rounds. Yet, just as I still buy manual transmission cars, I hankered for the old-time icons. Now retired and with no judgmental colleagues, I can return to indulging my guilty pleasures of revolvers and 1911s.

I have several 1911s, and other .45 pistols, but when I read up on this offering from my favorite gun manufacturer, I knew I had to have it.

To start, it has a wonderful retro look. It's beautifully made, that's the first thing that strikes the objective observer--and if you don't agree, then in classic prog argument style, you not only are not an objective observer, you are a morally inferior being sold out to Russian and European interests and are a racist, to boot.

It has a 4.25 inch barrel, a steel slide, comes with a seven-round and an eight-round magazine, and has a light-weight receiver made of a super secret material called (switch to Homer Simpson voice) Scandium--which I understand S&W gets from secret mines on Mars. The thing is light, compact, and very smooth.

Does it shoot? Why, yes it does. I took it straight out of the box to a little family-owned range here in Wilmington, and ran 200 rounds through it. Look, I am not the world's best shot, and still have to concentrate on my grip, but it performed flawlessly. The gun, at first, felt smaller than it really is. I know it is being compared to a Commander, but feels smaller and lighter--But of course! It's the super secret Scandium--and took me a bit to get used to it. Once, I did, however, I got those groupings nice and tight.

I do most of my handgun shooting in the four-to-seven yard range. "Wimp," you anti-semitic racists say? Per the FBI, back when the FBI was the FBI, over 90% of all shootings take place at about ten feet, or three meters for the Euros in my paltry audience. A friend of mine in the FBI, back when the FBI was the FBI, told me some years ago that if you shoot somebody at a range greater than those distances, you run an increased risk of some over eager prosecutor, especially in a blue jurisdiction, coming after you--no imminent threat, you could have retreated, etc. I don't know if that's still true, but it makes sense. Let's face it, if you're defending yourself with a gun, it's probably in your house, on the sidewalk, or getting into your car as you come out of a whorehouse with your wife, in other words, relatively short distances. Might as well get good at those. These smaller handguns--such as the beauty pictured above--are easy to carry and quite good at that range, and not so good if you go too far beyond it.

There you have it, my totally unqualified and useless opinion--but it's free and worth every penny.