Well, friends, as did all of you, I have paid my taxes for 2018. I am not happy. I had an enormous tax bill; I just hope all those illegal aliens enjoy all the stuff I provide them. So, in anticipation of April 15, I decided to get myself something a bit more fun than another IRS form. Why, yes, it does mean yet another handgun joining the family.

Two friends, one Aussie and one Mexican, had for years told me about the glories of the 38 Super. I didn't pay much attention as surely nothing could compete with the .45 ACP, especially a 1911 chambered in that righteous round.

Well, things happen. In a blue funk thinking about my money going to Uncle Sam, I started reading about the 38 Super, and got intrigued by its history in shooting competitions, and by the generally positive things professional shooters had to say about the cartridge. I watched a lot of videos comparing the 9mm, .40, .45, and the 38 Super. I grew more and more interested; never having shot, much less owned, one of these rare birds, I headed over to my favorite gun store in Wilmington (Backwater Guns.) As they didn't have one hanging about, I ordered one. Three or four days later, it arrived straight from the Colt factory, giving off that new gun smell. 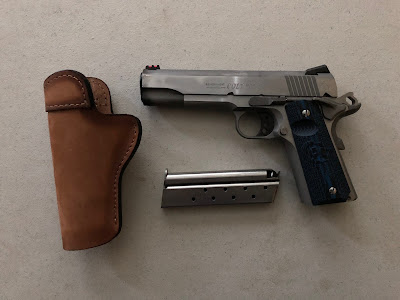 The eagle-eyed among you will notice that the slide looks dirty. Yes, indeed. I snapped this picture right after we got back from the range in Raleigh. No more new gun smell.

I ran just over 220 rounds of Sig .38 Super +P 125 grain FMJ through it. I had two fail-to-feed incidents both with the same expensive after-market magazine, and both on the last round. I put that mag aside, and the day proceeded without incident. In fact, it proceeded beautifully!

The gun is simply an amazing and very sweet shooter. It has a superb trigger, and great ergonomics--that is a fancy word for the grip is real good. The thing stays on target as if glued there. I provide some proof of that with the following image: 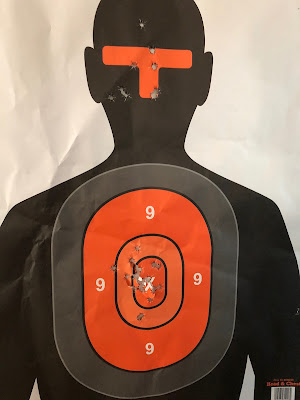 I brought along my trusty 45 S&W MP 2.0 for comparison and--believe it or not--the Colt outshot the S&W--and that S&W shoots very well. The main difference, in my totally unqualified opinion, being the trigger; the Colt trigger is far superior even to the improved trigger in the 2.0. The other factor, perhaps, might be the caliber; much less recoil with the Colt.

I hate to admit that my Aussie and Mexican friends were right--I'll never hear the end of it--but honesty compels me to announce my love for the 38 Super. I would carry it, but this 1911 is just a little too big.