The 4th: Now More Than Ever

It appears the morons seek to lead us into a dour, doubting, and grim 4th of July. Traditionally one of the happiest events on the American calendar, the 4th, and all it stands for, has come under relentless assault from "scientific experts," illiterate "academics," and an assortment of b.s. celebrities and pundits.

The lynch mobs have learned from the old tactics of the mafia and, of course, from Al Sharpton and Jesse Jackson. You know, "Sure would be a shame if your business caught fire; I am sure a donation to racial equality could help prevent that . . . " The highly anti-semitic and anti-white Al Sharpton, now a regal and regular feature on MSNBC and at Democratic conclaves of various types, was a master at that. I lived in NYC during his reign of terror and his various scams--e.g., Tawana Brawley, anybody? Freddy's Fashion Mart? Nothing new under the sun, I guess, just now it's on steroids.

The President intends to hold a 4th celebration at the Mt. Rushmore national monument. Now, SUDDENLY, we hear from the NYT and other purveyors of the progressive faith that Mt. Rushmore is sacred Native American land, and that Trump's holding a 4th event there is a "celebration of white supremacy."

Was it sacred Native American land when FDR dedicated the monument? Well, I guess that's another reason to tear down the FDR monument in DC . . . How about when Obama visited it? Or Bernie Sanders? The NYT and all other denizens of progo Manhattan might want to start packing out since Manhattan once belonged to the Lenape or Delaware Indians, and they got rooked by the Dutch for some $24.

This is a great country founded by some great people on great principles. Never apologize.

Here, I present a photo of the Diplopad in Wilmington festooned by the immigrant Diplowife. Don't ever tell her that America is not a great place. 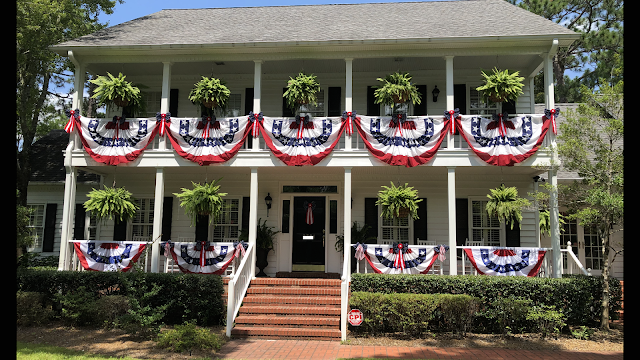