The ATF, Guns, Mexico, and the Kon-Tiki Mentality

Growing up in the 1950s, we were all required to read the book by the Norwegian explorer, the late Thor Heyerdahl, Kon-Tiki.  As you all likely know, the book told of the 1947 expedition organized by Heyerdahl to show that people from South America could have found and settled the Polynesian Islands well before Columbus's arrival in the New World. To show that this was possible, he built a raft in Peru made of balsa, bamboo, pine, and hemp. He and his Scandinavian crew sailed off and showed that, yes, it was possible, knowing where you were headed, getting critical help from the Peruvian navy, US Army field rations, and modern navigation and communication equipment to sail across some 3800 nautical miles of the South Pacific and reach an island in a wooden raft. Although I loved the book and read it several times,  as an obnoxious fourth grader, I was always troubled by one question, "Even if it were possible for that to happen in pre-Columbian times, did it?" While my teachers could not answer that, eventually, of course, researchers determined that it did not happen.

I got to thinking about Heyerdahl and Kon-Tiki this morning as more and more details come out of the disastrous ATF "Fast and Furious" operation. The more comes out, the worse the ATF and the Department of Justice look. What we have is an incredible act of politically and ideologically driven stupidity that has cost the life of a US Border Patrolman, an ICE officer, and who knows how many lives of Mexican cops and civilians.

The ATF took a page from Heyerdahl. Let me explain. They could find no evidence that US-origin guns were responsible for the horrendous death toll in Mexico. Instead, therefore, of continuing to look for the evidence, or in best Gordian knot-cutting fashion deciding that maybe, just maybe, those Russian, Chinese, and Eastern European guns were coming from Russia, China, and Eastern Europe, the ATF decided to "prove" they could come from the USA. Those clever lads at the ATF set up their own gun smuggling ring, forced law abiding gun dealers in the American Southwest--over the dealers' documented objections--to sell thousands of guns to members of the ATF gun ring, which then had the guns delivered to Mexican drug runners. There, proof! You wanted proof, we made some for you! See American guns go, well, could go to the cartels!

Heyerdahl would be proud--although we should note one big difference: although perhaps a purveyor of hack anthropology, Heyerdahl never killed anybody.

Eric Holder and his geniuses belong in prison. 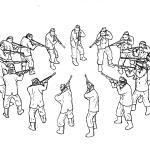