Yes, the Greeks are voting, again. They have two main choices. The first choice, and the favorite of the Eurocrats and Europe's diminished capacity political classes, is The New Democrat Party, which sort of pledges a sort of allegiance to a sort of austerity program that will sort of guarantee a continuing bail-out from Germany, oops, I mean the rest of Europe.  The NDP "promises" to push for "austerity" in exchange for staying with the Euro and getting lots and lots and lots of money from, well, you know.  In the other corner we have my favorites, the Syriza Party.  The Syrizans are open and honest about their thievery.  They want to keep the Euro, reject austerity, and demand that the Germans keep underwriting Greek expenses forever and ever.

We are seeing a whole continent and potentially the whole world's economy being dragged to ruin by insane leftist policies in Europe and, tragically, in the United States, once upon a time the only adult in the room when it came to economic issues.  The results of the Greek elections are irrelevant. The NDP cannot deliver on "austerity" and the Syriza has no intention of even trying. The Greek economy is in total collapse; Greeks and others are pulling about one billion dollars a day out of the country. It is too late to talk about minor austerity programs or tax increases or pension reforms. It is time for the wrecking ball. The solution for Greece's problems will be ugly and painful and have international consequences that none of us can foresee. Greece must get out of the Euro, reestablish its own currency, and let the market determine the real worth of Greece's currency and economy. It is a nightmarish scenario but it is the only one that offers any hope for Greece--and Spain, Italy, Portugal. When you stop and think about the complexities involved in disentangling Greece and the Euro it is very daunting, e.g, stopping the capital flight, doing things quickly and even secretly, setting the "IPO" price for Greece's new currency, dealing with the sudden contraction of national wealth, etc. Not doing it, however, offers no long term hope for Greece or Europe unless the German ATM is going to continue to spit out the cash forever and ever.

In my view, it would be better for all for the Greeks to elect the honest crooks of Syriza than the usual devious crooks of the New Democrats. It would clarify the issue mightily. 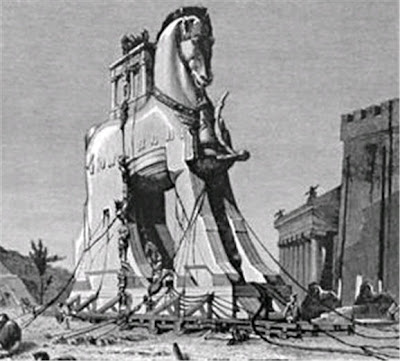