It was 7 am. Unable to sleep, for the past three-plus hours, I peacefully had been binge watching an older British documentary series titled "The First World War, The Complete Edition," (overall not too bad, despite dismissive treatment of US involvement, and only passing mention of the Greatest General of the Great War, Australia's Sir John Monash.) My idyll ended when The Diplowife (retired) burst into the man cave to announce, "Rat! There is a giant rat in the pool! The dogs are in the water chasing it!" All this in Spanish, which comes off much more dramatic than in English. I, however, am used to the Diplowife announcing the presence of rats (here) and took my time repositioning the Lazy Boy, shutting off the TV, gathering and putting on my shoes, slowly lumbering downstairs, and, finally, making it out to the backyard.

Some context to the dazzling events that followed.

Our progressive overlords in California have declared us in a severe drought. That, of course, meant it was raining like hell when I went outside. Global Climate Change causes drought which causes torrential rain. So, please, get with the program you Settled Science Deniers!

My bleary eyes took in a scene comparable to the devastation of Pompei after the volcano; New Orleans after Katrina; Dante's Inferno on a bad day; Detroit after fifty years of Democrat rule; Cher without makeup . . . OK, maybe, I exaggerate.

The dogs, Hartza and Txiki, were, indeed, in the pool. The Diplowife (retired) ran about, yelling at them in Spanish and English, trying to grab 100-pound Txiki by the tail to pull him out of the water and into the rain. On seeing me, the boys willingly climbed out of the pool, and related their adventure. Lots of jumping, barking, howling, wet paws and sloppy kisses. After a few seconds of this ceremony, Hartza ran to the side of the pool, and began poking with his snout and paws at something in the water. Not wanting to miss out on the action, Txiki did a magnificent running belly flop back into the pool, and began swimming furiously towards Hartza. I walked over next to Hartza and peered over his large head into the water. Yes, indeed, a large rat in the pool. When the rodent would poke his/her/transgender head up to get a breath, Hartza, would push the creature back under. Those water boarding classes I had included in Hartza's obedience training clearly had an effect.

With the pool skimmer I fished out the beastie. The poor thing, which I had assumed dead or nearly so, did a Lazarus-like return to life, and in a magnificent Olympic grade leap, he/she/it sprung from the skimmer net over the fence, and into the neighbor's bushes. Gone! He/she/it would live to gnaw again!

Hartza (pictured below) looked at me in total disgust. I had disappointed him and Txiki. What kind of pack leader doesn't kill the enemy or at least allow the troop to tear him apart? 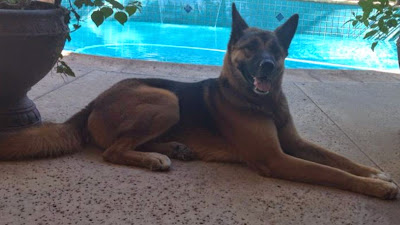 Dealing with rats and chaos, I, of course, began thinking about DemocRATS, and the latest news sweeping our beloved but increasingly ragged Republic.

I refer to ABC "news" anchor George Stephanopoulos. I won't go over the whole mess; there are lots of stories about this (here, for example). I have written before about progressive "journalists" (here) and noted that foreigners rightly express surprise over how much influence and wealth we bestow on news anchors. Little George's apparition at ABC, even before this latest mess, however, made no sense in any world where news organizations pretend to have a modicum of objectivity or at least don't employ the fox to guard the hen house. A long-time Democratic Party hack, and devoted follower of the Clintons, Stephanopoulos has worked for the crooked power couple for years, and has had a close personal relationship with both Bill and Hillary, as well as with their shady Clinton Foundation. Even without "knowing" that he was a donor to the Foundation, and featured as a prominent regular at its events, how could ABC possibly have considered him an objective journalist out for the TRUTH? How could the idiotic Republican party have agreed to allow this DNC hatchet man to moderate a GOP debate next year, especially given his performance the last time when he ambushed the candidates with a stupid hypothetical question about a ban on contraception?

Why not have Karl Rove moderate the Democratic party debates--if there are any? I am available if Mr. Rove declines.

This Stephanopoulos fiasco provides yet another demonstration of the corrupt nature of progressive politics in our country, and the weak response from the opposition. Just what we needed, right? Another example of that corruption and the tepidness of today's GOP. At least in the UK, PM Cameron seems willing to tackle the ideological corruption that has so destroyed the once venerable BBC.

I am going back and finish that First World War series, as I continue my effort to brush up on my knowledge of that war as we mark its hundred year anniversary. By the way, I want to recommend another terrific British three-part series on WWI titled "Our World War." It's a stunning look at the war from the perspective of soldiers in the field--very well done.

Back to guarding the property against the invaders. Fortunately, I have Txiki on the job; always watching for suspicious activity in the neighborhood. Nothing gets by him . . . especially phony news anchors.