Now For Something Serious: Dogs [UPDATE]

Have been spending way too much time on nonsense, e.g., Obama's foreign and domestic policies, and must now focus on what is really important in life, dogs.

As noted before (here and here), I had a beloved Rottweiler who after some 11 years gracing us with her humor, loyalty, intelligence, and protection, moved on. I swore off dogs forever, but the pull of the canine, the call of the mild, the howl of a good time has proven too much. My daughter and I have been hitting the animal shelters and various dog rescue organization events. Had we our druthers our temporary house in California would be home for 50 to 100 large K-9s. Only fear of provoking the wrath of the Diplowife--35th wedding anniversary, yesterday--has restrained us.

But--Ha!--no longer! We discovered this magnificent young brute, a German Shepherd/Akita mix, who overcame the restraints of what commonsense I still possess. 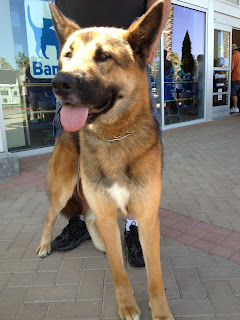 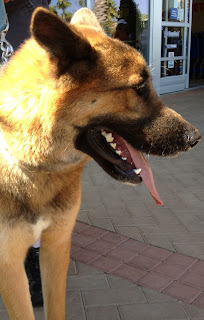 It is not like the old days when you went to the fetid dog pound on the outskirts of the city dump, woke up the guard, slapped down ten bucks, and loaded Fido into the truck. Now you must apply, and be interviewed, and be examined, and be approved. I dutifully submitted an application, providing references and financial data and swearing to my credentials as a responsible animal lover. I, subsequently, have been interviewed over the phone--I did not let on that I am The Diplomad, as I didn't want to play the Oprah Prima Donna card, "Do you know with whom you're dealing?"

Our house gets inspected on Thursday to see if it is worthy of His Highness Ludwig Von Yakuza. My daughter is a bundle of nerves. I, on the other hand, await with the equanimity of one who has dealt with State inspectors, Hill staff, and policemen all around the world, in other words, with a bottle of scotch and a bundle of bills at the ready (Disclaimer from Management: The owner, editors, and executive directors of The Diplomad do not condone this sort of behavior, and no intent to promote it is implied or should be inferred. Do not attempt this at home.)

It is easy to make fun of this dog adoption process. It, however, does show a touching willingness by many ordinary people, operating without government support, sacrificing their own time and money in a bid to care for abandoned and abused animals, and trying to ensure that these animals go to safe and loving residences. I think you can judge a society by how it treats children and animals. It seems, unfortunately, that we currently do better with the latter than with the former, precisely because of the great amount of government intervention in "caring" for children. To a very large extent the destruction of the family and of the non-governmental support structure that existed to help families through crises has been a result of  deliberate liberal government policies. We can see liberal policy "successes" most dramatically in Eden-like places such as Detroit. If we want to see streets filled with stray, sick, and violent packs of dogs, we should enact government programs to care for dogs, and push hardworking private sector people out.

UPDATE: Inspection day. Nice inspection lady came over; we groveled, and apologized re the state of the house because of the paving operation underway.  We PASSED!!!! We get to pick up the brute, which we have decided to rename Hartza ("Bear" in Basque) next Saturday. I can't wait for Hartza to eat the neighbor's cat . . . just kidding . . . might give Hartza a bad case of indigestion.