From Real to CGI: From Trump to Biden

It's mourning for America.

It remains unclear when/if we will rebound from the disasters of 2020; between the fake pandemic that disrupted our economy and society, and the fraudulent elections that destroyed what little trust remained in our political institutions, there seems little hope for a quick recovery. The fake inauguration of January 20, has installed a fake president, what one of my sons calls "America's CGI president." I would add, it's not very good CGI; many cheap movies and video games have better CGI--note to programmers, don't make the "president" character out as a gray, gaga, crooked, pervert.

The coup which the progs, aka Communists, had plotted for years, decades, went off better than they could have hoped. With little "opposition" resistance from the GOP, a total collapse of the justice and the judicial systems, the use of targeted violence, massive electoral fraud, and the active complicity of both the new and the legacy media billionaire titans, nearly 250 years as the world's most successful and powerful democratic republic vanished in a blink of an eye. Our venerable Constitution, the superb guide for those almost 250 years, has become an old document in a museum, something held up and derided as an example of "toxic white male culture."

Donald Trump was by far the best president America has had since Abraham Lincoln.

He gave us renewed hope that freedom and liberty could trump the hopelessness and negativity promoted by the left. He questioned and challenged the corrupt and self-anointed global elite; restored economic growth and prosperity which benefitted the majority; began the process of re-establishing us as an industrial power; refused to undertake pointless wars while at the same time re-building our military; and began to reassert our control over our border, energy, and educational policies emphasizing respect for our sovereignty and traditions.

Trump's proved a masterful performance. He was not the usual politico: he did not lie to us, and did not enhance his personal finances. We will miss him, miss him greatly. He will, undoubtedly, now face endless tribulations as his enemies come after him, his family, his businesses, and his supporters' freedom; the left needs to destroy him and the "deplorables" as a political force. I hope, and trust, that "We the People" will not allow that to happen. We'll see.

Taking the suggestion of an astute reader of this ultimately doomed blog, I reluctantly took down Old Glory from in front of my house, and replaced it with the Gadsden flag. The Diplowife predicts it will not last long; some irate neighbor will either rip it down or call the cops--"I feel threatened!" 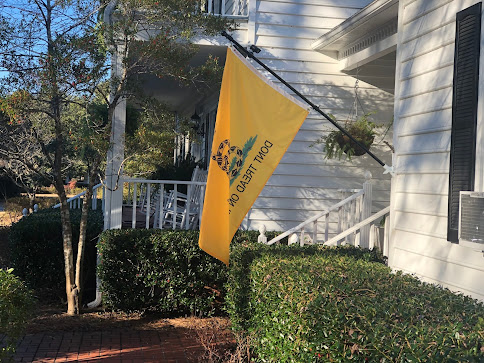