Chicago: Images of Our Future

There is a popular movie out called 2016: Obama's America which apparently explores what America would look like after another four years of President Obama. I haven't seen the film, but if the descriptions of its contents are correct, I really don't need to see it: I just need to look at what is happening in Chicago to see what America will be like with another four years of the current Obama disaster.

Chicago, even more than California, is the future that awaits us if Obama gets re-elected and is "successful." We will have a society torn apart by race war, crime, class hatred, and chaos in the streets.

Our number three city is one that is hopelessly corrupt, burdened with a vast and overpaid bureaucracy, saddled with huge taxes, and, of course, gong broke Greece style.  Its inept school teachers, e.g., only about 20% of all students know their three "R's" at the level appropriate for their grade and age, are the highest paid in the nation, and, of course, demand more. Chicago's thuggish Mayor and close Obama associate, Rahm Emmanuel, has his hands full. The Democrats' prime creation, the city's thuggish public sector unions, have turned on their political masters; akin to Frankenstein's monster they have reached the point where they think and feel that they are the masters, e.g., teachers carrying signs reading "Take Back Chicago."

Samuel Gompers, the English-born founder of the modern American labor movement, once famously replied when asked what American workers wanted with one word, "More."  And that was fine in that era when the workers needed some ability to push-back and get a bigger slice of the pie. The labor movement, as we all know, has deteriorated in the past fifty years with the only growth area being the public sector and its "unlimited" bank account. Well, it now turns out the bank account is not unlimited, and the tax payers (about 50% of the population) are starting their own push-back against the steadily escalating demands of the public sector. Chicago is now caught in a huge vise of its own making: the producers of wealth are in a steady flight from the city, and it is being left to the consumers of wealth, i.e., the public sector, the government-dependent "NGOs" and activists, and growing numbers of individuals on the public dole.

Rubens and Goya would have known what sort of portrait to paint of the Chicago Democratic machine in action . . . 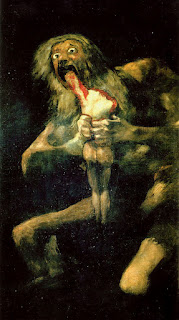