Osama: The Canary in the Cage

When I was a child we had a canary.  Although we had never accused or, much less, convicted him of anything, we kept him in a cage for an indefinite period. He, I am ashamed to say, did not have access to an attorney.

I hadn't thought of that innocent bird until today; the videos of Osama just released by the Pentagon reminded me of our canary.

Our little canary would spend hours contemplating his reflection in a little mirror that hung in the cage. It seems Osama did the same thing.  We see video of a scrofulous Osama watching himself--better said,  a younger version of himself---on video. He was just like that canary.

Thinking of that bird, got me to thinking that there existed a contract between the canary and our family.  He lived in the cage, and, in exchange, we fed him and protected him from the neighbor's cat, and from all the other dangers that exist for a little bird in the big world. On reflection, this seems to have been the arrangement Osama had with some Pakistani government agency or some powerful Pakistanis.  He would stay in the cage, not do much to attract attention to himself, certainly nothing that would lead back to Pakistan, and these Pakistanis would "make sure" nothing happened to him. Maybe there was money involved, usually the case in corrupt Pakistan, or just some ideological affinity.  He was, in essence, I think (and I have no special information) under house arrest, probably by some faction of the ISI, or another part of the military, or both.  It's likely that others, e.g., Mullah Omar, al-Zawahiri, have similar deals.  Given what happened to Osama, don't be surprised if these arrangements suddenly get canceled.  We might just see relatively soon the Pakistanis either opening the cage door and getting these other canaries to fly away, or suddenly "finding" them and either killing or turning them over to us. 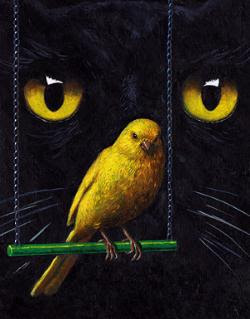